Rhinoplasty aka “Nose Job” involves reshaping the nose not only aesthetically but also at functionally if needed. Rhinoplasty procedures can significantly alter the face due to the nose being in the center the face and a focal point. Subtle changes can cause dramatically change the overall facial aesthetics. The techniques involved in rhinoplasty are numerous and can range from a simple dorsal hump removal of complex grafting, tip work, septal work or crooked nose repair.

Rhinoplasty can be performed for cosmetic reasons or functional.

Rhinoplasty Before & After Photos
View Gallery

Dr. Rikesh Parikh is one of the best doctors in the NW! He did a Rhinoplasty for me about 2 weeks ago, and it looks TOO perfect. I recommend everybody to go to Dr. Parikh for facial and body surgery.
C.M.

The look of the nose in a man is different than in a woman. In men the nose generally has less angle between the upper lip and the bottom part of the nose called the columella around 90 to 95 degrees. Women can tolerate more tip rotation upwards. Also the dorsum or bridge of the nose in a male is usually straight down versus a female nose where it is straight or slightly sloped in. Female noses may also have a slight supratip break between the dorsum and the beginning of the tip. The skin over the nose is generally thicker than in a female. Thick skin can mask the underlying framework changes made during rhinoplasty as opposed to thin skin which can show the framework easily.

Rhinoplasty candidates are in relatively good health. They have been thinking about a rhinoplasty procedure for sometime. They have clear goals and expectations of what they think their nose should look like. At times, rhinoplasty may involve the use of cartilage or bone from other areas of the body if necessary. The risks and benefits of the procedure should be very clear. It is very important that the surgeon and patient are on the same page in terms of expectations and results. Dr. Parikh performs an in depth tailored consultation for each patient planning to undergo a rhinoplasty procedure.

This is a same day procedure. There may be a splint on the top of the nose that remains on for 1 week. If open rhinoplasty is performed the sutures are removed after 1 week. A vaseline dressing can placed over the incision until suture removal. The downtime is about 2 weeks. Swelling and bruising is common, the patient should sleep in a semi upright position to help control the swelling. If there are any questions during the postoperative course we encourage patients to call immediately. Follow ups are close initially and will be spaced out farther with time.

With any surgical procedure complications can occur, but are generally low. We encourage that you ask about complications during your visit with Dr. Parikh. Dr. Parikh will ensure that your safety is first and discuss any concern in great detail that is tailored to your specific medical history. 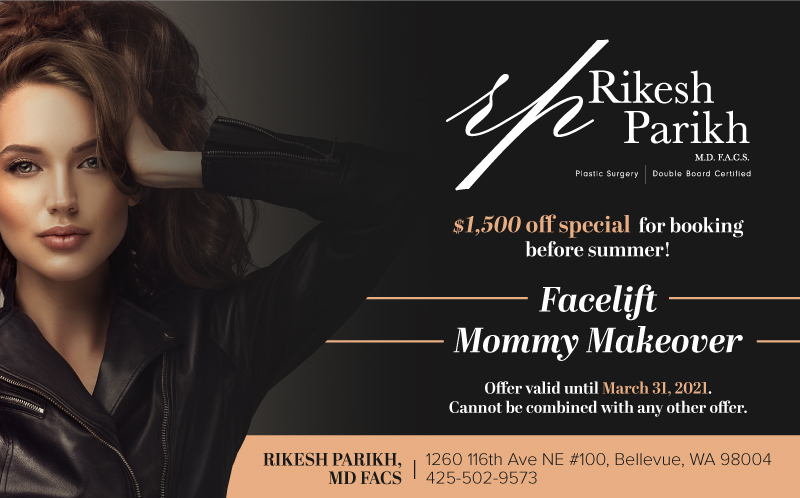