Tired looking eyes, is a common complaint of many patients. This can be the result of the upper or lower eyelids themselves or descent or drooping of the brow. The brow lift procedure is specifically for brow ptosis or descent. It can correct low eyebrows that give the appearance of smaller, more tired looking eyes. The brow lift can be performed either with an open technique or a minimally invasive technique called the endoscopic brow lift. Dr. Parikh can perform either technique which would be best suited for you.

Dr. Parikh is the most patient and down to earth plastic surgeon. He has done my botox and augmented my breasts. I am always so happy with my results. Even with traveling out of state, Dr. P and his staff make everything so easy. I recommend him to all my friends and family.
B.C

Anatomy of the Brow

The brow is the front area of the scalp with the following layers;

From the superior orbital rim to the hairline the brow length is 5 – 6 cm. Anything more than this can be considered a high forehead anything less and short forehead.

The important nerves and vessels that pass through the brow are the supraorbital and supratrochlear nerves, the frontal or temporal branch of the facial nerve, sentinel vein and supratemporal artery and vein.

The Frontalis muscle is responsible for brow elevation and creates “worry lines”, the horizontal creases, one sees when they elevate the brow. Botox is commonly used to temporarily treat these lines. Depressors of the brow include the Procerus muscle, corrugator muscles and the orbicularis oculi muscle. These muscles create the 11’s lines when contracted.

The depressor muscles are important in brow lift because they act as the “brakes” or opposing force for trying to raise the brow up. These muscles can be removed during surgery either partially or almost completely to resist these opposing forces.

These are strong adherence areas of the brow to the underlying facial skeleton. They fix the brow in position and must be released during surgery to allow mobilization of the brow so that it can be moved upwards.

The brow drops with weakening of the ligaments and soft tissues. Some patients have a low eyebrows genetically. Drooping of the brow will affect the overall appearance of the upper face and eyes. The severity of bow descent and baseline anatomy will determine what procedure will be most effective.

This is minimally invasive with small incisions behind the hairline. In general no skin is removed and the lift is created by the suspension of the underlying tissues. It is important to go to a Plastic Surgeon who is familiar with this technique. The down time is less than the open technique and healing is quicker.

Longer foreheads are generally not ideal candidates for a coronal incision. This technique will result in the hairline moving back and making the forehead appear longer. Short foreheads are ideal because this technique will elongate the forehead and provide a better balance to the facial aesthetics. Hairline incisions are good for longer foreheads that will not push back the hairline. The direct brow lift is less invasive, however there is a scar above the eyebrow that can possibly be seen. It is important to set the goals and expectations in a thorough consultation with Dr. Parikh prior to your procedure. We can offer brow lift either awake or asleep.

This is a same day procedure and the patient will go home that day after the procedure. After the procedure there may be some discomfort. Some swelling and bruising is normal. A bandage is placed over the brow. Overall recovery is not very extensive. Patients usually return to work within two weeks. Showering may occur after 48 hrs. Sutures or staples are removed after 1 week. If there are any questions during the postoperative course we encourage patients to call immediately. Follow ups are close initially and will be spaced out farther with time.

With any surgical procedure complications can occur, but are generally low. We encourage that you ask about complications during your visit with Dr. Parikh. Dr. Parikh will ensure that your safety is first and discuss any concern in great detail that is tailored to your specific medical history. 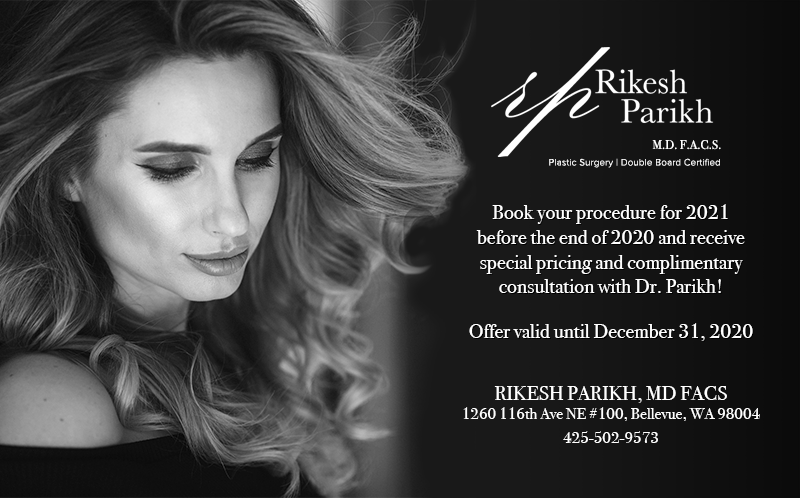